Had life returned to a new normal by now, the 15203 community would have come together on Saturday, August 29th for its annual neighborhood party.  We can imagine that our initial conversations at Armstrong Park would have been how we “survived” sheltering over the past few months.  Although we won’t be sharing our experiences in person, we thought our residents would like to share some positive pandemic stories with others  on the South Side.  Here are their stories.

The pandemic was tough at first. Like really tough. Our story time and library programs on Tuesdays and Thursdays were cancelled. Our Fridays at Ormsby were gone. The playgrounds were off limits. The days were long in the beginning. Really long. But then this neighborhood decorated its windows with bears, and they painted rocks, and we built something together.  Neighbors who we mostly saw during story time have become friends we see daily, hunting bears, painting rocks, exploring the South Side. In many ways, being a Southsider saved me during this pandemic. Sometimes being a Southsider is hard, but it feels like we have a bond now. One string that ties us all together. And I’m so grateful to be walking this journey amongst my fellow south side neighbors. 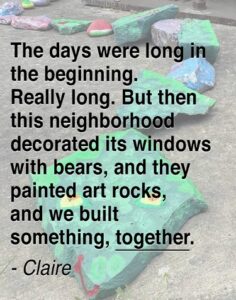 We’ve always enjoyed our garden as an extra room in our house during the summer months but this pandemic year it has become an essential space for our well-being. As the city and the country closed down our backyard opened up. Our planting began in early April and by May it was in bloom  — rosebushes, hibiscus, hydrangea, vines and a vegetable garden with lettuce and tomatoes. It’s been our place for morning coffee, afternoon rests and evening celebrations. We wave to neighbors passing by, prepare meals on the grill and read the Sunday New York Times. We realize that we are fortunate and have the inner and outer resources to be able to make it through the days in front of us.  We are also fortunate to be part of a strong community and we happily share the many vegetables that our patch of land in the Bandi Schaum garden produces. Throughout this difficult time we know that there are many other gardens on the South Side that have become people’s sanctuaries from the storm. 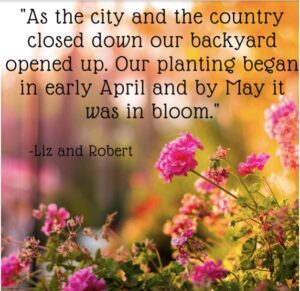 The pandemic, though negative in its nature, has allowed me to explore new hobbies to help pass the time in a positive way. Since moving, my partner and I have become plant parents. What began as five simple cacti that we had had for years, turned into a house full of both indoor and outdoor plants. Our plants total around forty-five now. Because of our success with our plants, we thought we were ready to adopt a small cat to have as company. We decided to dog-sit my parents elderly dog Scooby for the weekend as a test run. I grew up with Scooby, love him dearly, but never had I been so anxious about having another living being around. My partner, a person who has grown up around animals felt the same way. Needless to say, we will be sticking with plants for the foreseeable future. We have come to the conclusion that we are better at being dog siblings rather than dog parents. 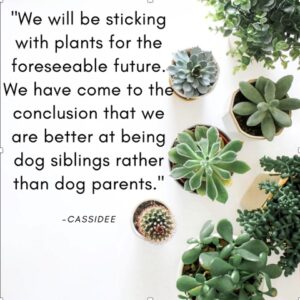 I have always enjoyed both traveling and cooking and, upon retirement, I was able to combine the two. Over the last 7 years, I have been on two cooking vacations, one in the Tuscany region of Italy and the other on the Greek island, Ikaria, at the home of the Greek food author, Diane Kochilas.  With both I brought back great memories and recipes. The pandemic halted travel but sheltering in place has provided me more time to cook. When I learned that Diane would be conducting cooking classes via zoom, I signed up and spent many Saturday afternoons interacting with her and others from around the world.  In addition, her series – My Greek Table – began streaming its 3rd season and showcased more of the Greek islands and their signature dishes. As the pandemic continues, there are more cooking classes to take and Greek recipes to prepare. 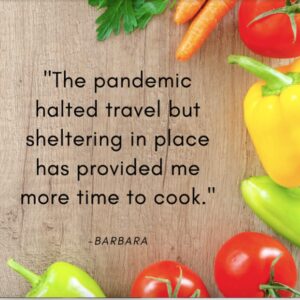 Throughout the COVID-19 pandemic and the constantly changing expectations and regulations for public actions, I was able to find positivity in family game nights. My family has always loved to play board games, card games, or any other sorts of gaming. But COVID provided us a new opportunity to reinvigorate our competitive spirit. We have loved playing all sort of games from our classic card games to brand new board games that we learned together. 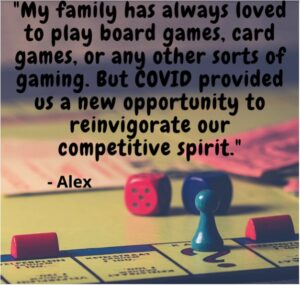 I am coming from Germany and was in Pittsburgh from February to July. It was an incredible time overseas. The neighbors in the South Side flats are awesome. We had during the Covid-19 Pandemic a couple nice evenings with friends. I liked a lot how the south Side was handling all the problems during the time. The bars had a very good concept to serve food and drinks.The stores had good concepts as well that you could buy everything there. But the most important point for me was, that all neighbors were friendly, satisfied and healthy! I wish all the best to you and your family. Stay safe and healthy. 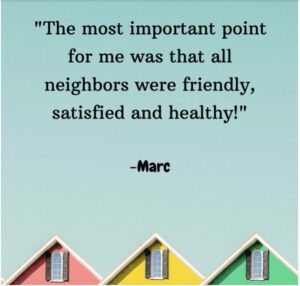 While reflecting on this question I could, initially, not think of a way to answer it. However, I soon came to realize that the pandemic had given me a gift, the gift of time. Time to read more, time to interact with friends even though it was remotely, time to organize my home. But most of all it gave me time to get to know a new person in my life, my Airbnb guest from Germany and, inadvertently, to coalesce my own feeling about living in this country during the first part of 2020. Marc arrived shortly before quarantine began and, being in the apartment directly attached to my home, and unable to go to his internship site or anywhere else, for that matter, for many weeks, we quickly began to rely on each other for company and conversation. We had “tea” most every afternoon at three outside on our adjoining deck and during those times I was privy to an entirely different perspective on what was happening in this country. I had to explain racism, Black Lives Matter, the current administration’s many foibles, and numerous other aspects of American life that were new and baffling to him. In doing so, I was challenged to articulate many thoughts and feelings that I had rarely discussed. Furthermore, these discussions helped me to understand his very European point of view of the world and to realize that this, undoubtedly, was really my point of view too! So, thank you quarantine, for giving me the opportunity to understand myself a bit more and for the chance to make a new friend! 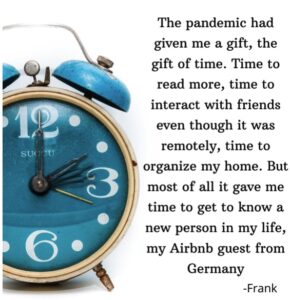 Right before the quarantine started, I got my first ever bonus from work. I was very excited and didn’t know how I wanted to spend it, but I knew that I wanted to spend it on something fun. Initially I was planning on using it towards a trip, but the timing could not have been worse, as suddenly I couldn’t travel anywhere. So instead, I decided to do something that I have wanted to do since I was a little kid. I bought myself the LEGO Millennium Falcon set, which is the largest LEGO set ever made and that I have always dreamed about building. So I bought it, built a blanket fort in my living room, and spent a whole week putting it together, just like I was a kid again. It was such a happy moment that allowed me to reflect on how far I had come in the past few years that I would never have considered doing if I hadn’t been stuck inside for months. 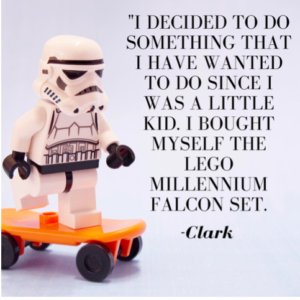 My life was not much different when the pandemic hit.  I’ve been recovering from various ailments for the last 3 years, so I’m at home most days. My days early into the pandemic were spent with my dog, Carter, only getting out for our daily walks throughout the neighborhood. I didn’t get to see any friends and family members for months.  But as the weather started getting warmer, I started hanging outside with my neighbors. We were sitting on our hard cement front steps for hours talking, planting flowers, pulling weeds, and just hanging out. We ended up building a raised flower garden on a patch of broken sidewalk where a tree once grew.  Years ago, my sister gave me director’s chairs that I had on my deck for extra seating but they were never used. So, I brought those chairs to the front of my house and we now sit on them. We keep talking about bringing out my tailgate grill and having a cookout on the sidewalk. We’ve had other neighbors walk by and join us. The pandemic has brought me closer to my neighbors and now they are like my family. I was not feeling well for a couple days and since they had not seen me,  my phone started ringing as to where I was. I will miss our time sitting outside when the weather gets too cold. 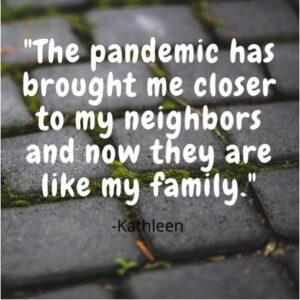 Please check back each week for more stories!